Will London still be the global fintech hub post-Brexit?

Finstar Financial Group, a private investment group, recently opened a venture capital arm, called FinstarLabs, which is hoping to find and invest in the next generation of financial services giants.

The first major decision Finstar had to make was where to set out its stall. London would have appeared to be the natural choice.

The capital of England has been heralded as the financial technology, or fintech, capital of the world. Within the space of a few square miles, startups can find the world’s largest financial services sector, one of Europe’s most promising technology hubs, and sympathetic policymakers and regulators.

So why has FinstarLabs instead opened its doors in Berlin? Mark Ruddock, a British businessman who has just moved out to the German capital to launch the business, explains: “Not only is the city a vibrant hub of startup activity and youthful ambition, it has many critical attributes that will help sustain and expand that activity.

“The cost of living is low, relative to the rest of Europe. It is attracting a wide range of talent from across the world. Top-tier venture firms are here in force, as are larger firms wanting to develop innovation centres. Berlin may very well become the epicentre of European fintech.”

London will not lose any sleep over any one organisation falling into the arms of a rival, but there is concern that Britain’s departure from the European Union could advance the claims of a host of fintech hubs, as they play on fears including access to investment, the single market and talent. There is also the simple fear that London will become less relevant as a fintech centre if the City’s banking sector shrinks.

So which fintech hubs should London be most concerned about?

Berlin and Paris appear to be making the most noise. Both cities have mounted aggressive campaigns to try to lure startups to their own hubs. Their inward investment teams claim they are being contacted by London fintech companies considering a European base so they can continue to benefit from EU regulation that will allow their products to cross borders easily.

It can also be cheaper to move than to stay. Commercial property in a prime location in Berlin, for example, can be less than a third of the cost of London and private rents are cheaper too.

Berlin Partner, an agency that promotes investment in the city, says it has also been fielding inquiries from companies from Asia and America that in the past would have naturally chosen London for their European base.

However, while Berlin may be a noisy neighbour, it may not pose the greatest threat to London’s status.

The Global Fintech Hubs Federation is a network of 44 emerging and established fintech hubs. In April, a ranking of these hubs by Deloitte still placed London at the top of the pile. Perhaps counter-intuitively, the closest European rival on the list – Berlin is not a member of the organisation – was not even in the EU. 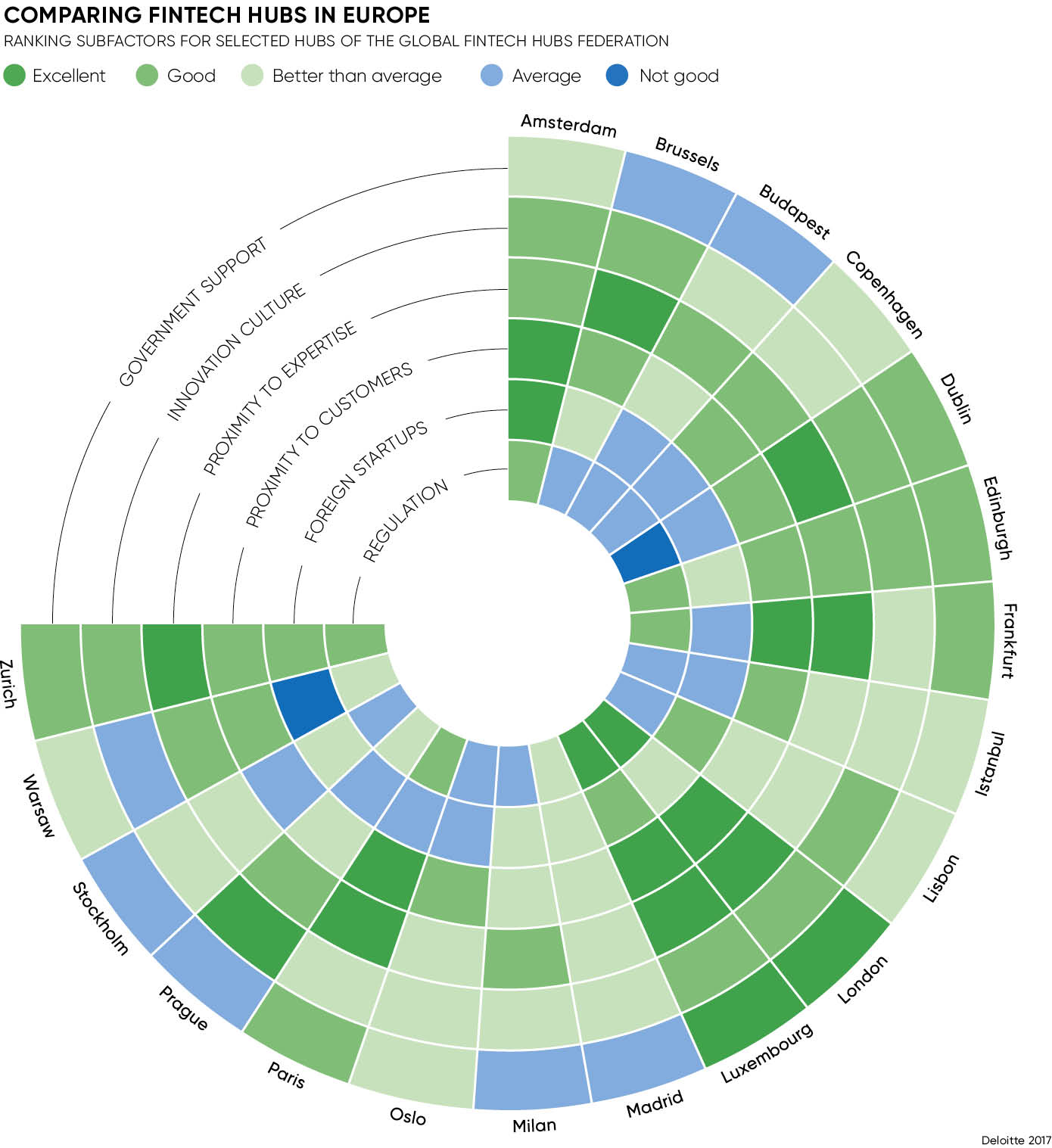 Katka Letzing, who leads the fintech division at Kickstart Accelerator- one of Europe’s largest multi-corporate and equity-free startup accelerator programmes, says: “With its heritage in financial services and the presence of some of the world’s largest financial institutions, Zurich is very well placed to become a global fintech hub. The incumbents, such as Credit Suisse and UBS among others, are working closely with the emerging fintech startups.”

Frankfurt and Stockholm were the next most highly ranked European cities in the report. The German city benefits from being home to more than 300 banks and the largest stock exchange in Continental Europe, Deutsche Börse Group. It also has a vibrant startup scene, investors, talent, financial institution and regulators. IT security is a particular strength.

The Swedish capital, meanwhile, is second only to Silicon Valley in producing the most highly valued technology startups per capita. When it comes to fintech, Stockholm attracts about one fifth of all investment in Europe and is home to Klarna and iZettle, two of Europe’s most promising payments businesses.

Rhydian Lewis, co-founder of RateSetter, a peer-to-peer lending platform, says the company is staying in London, but he’s noticed attempts of rival cities to lure promising companies like his.

“The key things that founders will look for are access to talent, a supportive government and low costs. Paris and Frankfurt have the first two, but are very expensive cities. I think that some smart founders will look further afield to cities in Eastern Europe which have great tech talent, welcoming authorities and are much cheaper places to do business,” he says.

Guy Wilkes, financial services regulatory and enforcement partner at law firm Mayer Brown, says rival hubs have obstacles to overcome. “None of the European competitors have the benefit of a financial services industry as large or as developed as London on their doorstep,” he says. “For example, Berlin suffers to some extent from being dislocated from Germany’s financial centre in Frankfurt. The importance of a symbiotic relationship between fintech and established financial services firms cannot be overstated.”

In that context, New York may be a more obvious rival, with Wall Street having a huge capital base a need for fintech innovation. Yet even the Big Apple has its fair share of challenges. “The US is a major centre for fintech, but in many ways it’s a more complex regulatory environment, not least because there are more bodies, with 50 states, federal agencies and law enforcement, to deal with,” says Mr Wilkes.